“It’s a good story. It’s an unfortunate story, but it’s a very timely story,” Steve Grant says. He felt his story needed to be heard so much so that he wrote a book titled “Don’t Forget Me.”

Grant exposes the gruesome truth of a parent’s worst nightmare — the loss of not only one child but two — and a nasty disease that’s ripping apart families.

“We have two boys who took two different paths to the same outcome,” he says. His sons, Chris and Kelly Grant, both died of accidental drug overdoses within five years of each other. 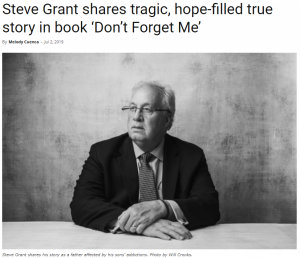 Steve Grant shares his story as a father affected by his sons’ addictions.
Photo by Will Crooks