Steve Grant Featured on The Courage to Change: a Recovery Podcast. 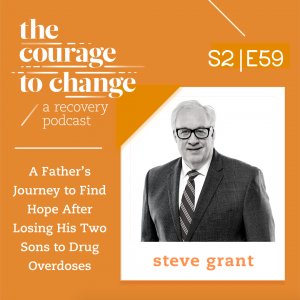 July 28, 2020
Thank you, Ashley Loeb Blassigame, for the opportunity to talk with you on The Courage to Change: a Recovery Podcast.

The Courage to Change Podcast #59

On a December day in 2010, Steve Grant lost his 24-year-old son, Kelly, to an overdose. Five years earlier, he lost his 21-year-old son, Christopher, in the same way. His only two boys: gone. After a downward spiral of losing his marriage, his only two children and dealing with the repercussions of such, Steve decided to take matters into his own hands and established the Chris and Kelly’s HOPE Foundation to fight back. The Foundation’s mission is to provide financial support to programs that treat teens and young adults who struggle with substance abuse and addiction. The Chris and Kelly’s HOPE Foundation operates under the auspices of the Community Foundation of Greenville, but is committed to assisting worthwhile organizations nationwide. Steve’s story has been featured in the Wall Street Journal and Clemson University’s TigerIllustrated.com “Letters from Dabo” section – Part 10.  In addition to being the Managing Director of Mass Mutual in South Carolina, he is also a recent author with his book “Don’t Forget Me – a Lifeline of hope for those touched by substance abuse and addiction”.