What an honor to be included on Guideposts.org! Thank you so much to Alikay Wood and Guideposts.com for sharing my story. 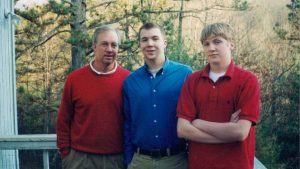 How This Father Found Hope After Losing Both Sons to Addiction
Stephen Grant turned his grief into action and has dedicated himself to helping people fight substance abuse.
by Alikay Wood – Posted on Jun 4, 2020

Stephen Grant was at a work retreat, when the leaders asked everyone to share what they hoped their legacy would be at the end of their life. It was then that he said the words that would change his life.

Grant had been struggling up to that point. His younger son, Kelly, had died two weeks earlier and nothing seemed like it mattered. But the question got him thinking about his legacy, and when it was his turn to share, Grant didn’t hesitate.

“I said, ‘I want my legacy to be that I, that I did everything I could to help adolescents and young adults who struggle with addiction, substance abuse and mental health or mental illness,'” Grant told Guideposts.org.

He was just as surprised as everyone else at what he had said, but he believed that God had put the idea in his heart.

When his colleagues asked him why that was the legacy he chose, Grant answered truthfully and explained how substance abuse had led to his divorce and the death of his two sons.

Grant’s journey to that moment had started years earlier, when his boys were teenagers.

From the outside, Grant looked like he had a normal family. His two sons were active in sports and band at school, and he was a devoted father.

Things changed one day when someone came to clean the carpets and found beer bottles hidden under the sofa. Grant suspected one of his sons was drinking and took his oldest, Chris, to a psychiatrist. It was there he learned the truth.

“The [doctor said], “Your son is being controlled by alcohol and drugs right now,” Grant said. “That was when he was about 15 years old.”  Read More at Guideposts.org