Thank you, Fox Carolina and Myra Ruiz. You can watch the video here.

Jeff Johnston of Iowa says he was inspired by Greenville man, Steve Grant 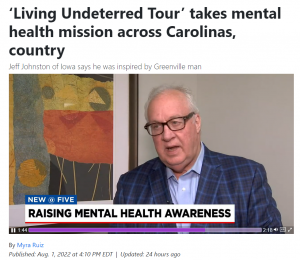 GREENVILLE, S.C. (FOX Carolina) – By the time Jeff Johnston rolled the “Living Undeterred Tour” bus into Greenville, he had already traveled thousands of miles across the country to raise awareness and money for mental health. The tour started in Johnston’s home state of Iowa after his personal journey of grief and despair.

In October 2016, Johnston’s 23-year-old son, Seth, died from an accidental heroin overdose after a struggle with drugs.

“I went straight downhill. I drank every day. I Invited every negative friend I had in my head for the biggest pity party in the world,” Johnston told FOX Carolina. “After 14 months, I decided I wanted to quit drinking. My life changed the moment I did that.”